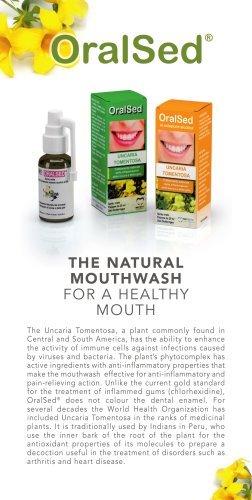 THE NATURAL MOUTHWASH FOR A HEALTHY MOUTH The Uncaria Tomentosa, a plant commonly found in Central and South America, has the ability to enhance the activity of immune cells against infections caused by viruses and bacteria. The plant's phytocomplex has active ingredients with anti-inflammatory properties that make the mouthwash effective for anti-inflammatory and pain-relieving action. Unlike the current gold standard for the treatment of inflammed gums (chlorhexidine), OralSed® does not colour the dental enamel. For several decades the World Health Organization has included Uncaria Tomentosa in the ranks of medicinal plants. It is traditionally used by Indians in Peru, who use the inner bark of the root of the plant for the antioxidant properties of its molecules to prepare a decoction useful in the treatment of disorders such as arthritis and heart disease.

INDICATIONS: OralSed ® has anti-inflammatory and immunostimulatory actions. It is indicated for use with gingivitis, canker sores, herpes simplex, rhinitis and rhino-pharyngitis. It is also indicated for severe mucositis in patients undergoing chemotherapy and immunosuppressive treatment for bone marrow transplantation. Essentially, there are no contraindications, except the precaution to avoid the use of Uncaria Tomentosa in cases of hypersensitivity to one or more components, or during pregnancy and lactation. Uncaria may interfere with the activity of anticoagulant drugs, low molecular...

*Prices are pre-tax. They exclude delivery charges and customs duties and do not include additional charges for installation or activation options. Prices are indicative only and may vary by country, with changes to the cost of raw materials and exchange rates.
Compare
Don’t compare this product
Compare up to 10 products