How Plasma-Derived Treatments are Produced
3Pages 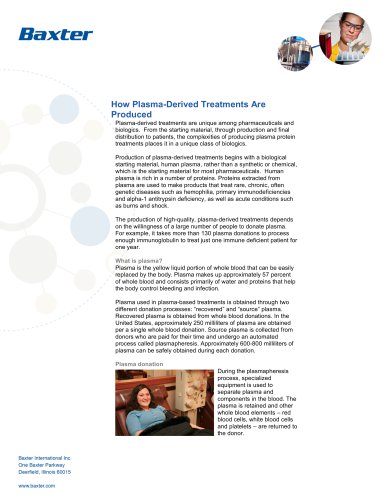 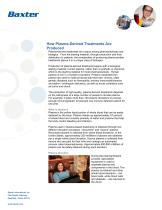 How Plasma-Derived Treatments Are Produced Plasma-derived treatments are unique among pharmaceuticals and biologics. From the starting material, through production and final distribution to patients, the complexities of producing plasma protein treatments places it in a unique class of biologics. Production of plasma-derived treatments begins with a biological starting material, human plasma, rather than a synthetic or chemical, which is the starting material for most pharmaceuticals. Human plasma is rich in a number of proteins. Proteins extracted from plasma are used to make products that treat rare, chronic, often genetic diseases such as hemophilia, primary immunodeficiencies and alpha-1 antitrypsin deficiency, as well as acute conditions such as burns and shock. The production of high-quality, plasma-derived treatments depends on the willingness of a large number of people to donate plasma. For example, it takes more than 130 plasma donations to process enough immunoglobulin to treat just one immune deficient patient for one year. What is plasma? Plasma is the yellow liquid portion of whole blood that can be easily replaced by the body. Plasma makes up approximately 57 percent of whole blood and consists primarily of water and proteins that help the body control bleeding and infection. Plasma used in plasma-based treatments is obtained through two different donation processes: “recovered” and “source” plasma. Recovered plasma is obtained from whole blood donations. In the United States, approximately 250 milliliters of plasma are obtained per a single whole blood donation. Source plasma is collected from donors who are paid for their time and undergo an automated process called plasmapheresis. Approximately 600-800 milliliters of plasma can be safely obtained during each donation. Plasma donation During the plasmapheresis process, specialized equipment is used to separate plasma and components in the blood. The plasma is retained and other whole blood elements – red blood cells, white blood cells and platelets – are returned to the donor. 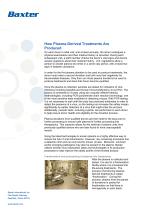 How Plasma-Derived Treatments Are Produced On each donor’s initial visit, and at least annually, the donor undergoes a physical examination and their medical history is recorded. During each subsequent visit, a staff member checks the donor’s vital signs and donors answer questions about their medical history. U.S. regulations allow a person to donate plasma two times in a seven day period, with at least two days in between donations. In order for the first plasma donation to be used to produce treatments, the donor must make a second donation and both must test negatively for transmissible... 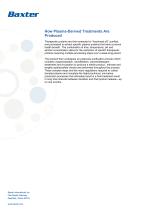 How Plasma-Derived Treatments Are Produced Therapeutic proteins are then extracted or “fractioned off,” purified, and processed to extract specific plasma proteins that have a proven health benefit. The combination of time, temperature, pH and alcohol concentration allow for the extraction of specific therapeutic proteins requiring multiple processing steps over a week-long period. The product then undergoes an extensive purification process which includes cryoprecipitation, nanofiltration, solvent/detergent treatments and incubation to produce a sterile product. Intricate and lengthy...

All Baxter catalogs and technical brochures