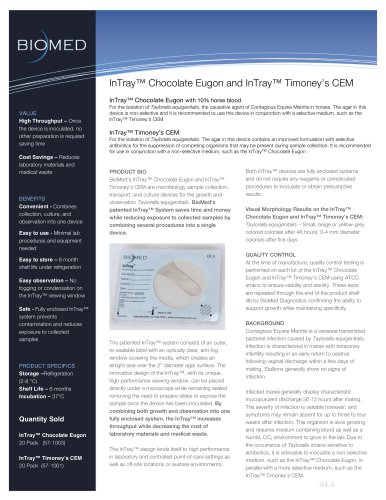 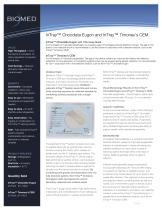 InTray™ Chocolate Eugon and InTray™ Timoney’s CEM VALUE High Throughput - Once the device is inoculated, no other preparation is required saving time Cost Savings - Reduces laboratory materials and medical waste InTray™ Chocolate Eugon with 10% horse blood For the isolation of Taylorella equigenitalis, the causative agent of Contagious Equine Metritis in horses. The agar in this device is non-selective and It is recommended to use this device in conjunction with a selective medium, such as the InTray™ Timoney’s CEM InTray™ Timoney’s CEM For the isolation of Taylorella equigenitalis. The agar in this device contains an improved formulation with selective antibiotics for the suppression of competing organisms that may be present during sample collection. It is recommended for use in conjunction with a non-selective medium, such as the InTray™ Chocolate Eugon BENEFITS Convenient - Combines collection, culture, and observation into one device Easy to use - Minimal lab procedures and equipment needed Easy to store - 6 month shelf life under refrigeration Easy observation - No fogging or condensation on the InTray™ viewing window Safe - Fully enclosed InTray™ system prevents contamination and reduces exposure to collected samples PRODUCT SPECIFICS Storage -Refrigeration (2-8 °C) Shelf Life - 6 months Incubation - 37°C Quantity Sold InTray™ Chocolate Eugon 20 Pack (57-1003) InTray™ Timoney’s CEM 20 Pack (57-1001) PRODUCT BIO BioMed’s InTray™ Chocolate Eugon and InTray™ Timoney’s CEM are microbiology sample collection, transport, and culture devices for the growth and observation Taylorella equigenitalis. BioMed’s patented InTray™ System saves time and money while reducing exposure to collected samples by combining several procedures into a single device. The patented InTray™ system consists of an outer, re-sealable label with an optically clear, anti-fog window covering the media, which creates an airtight seal over the 2” diameter agar surface. The innovative design of the InTray™, with its unique, high-performance viewing window, can be placed directly under a microscope while remaining sealed removing the need to prepare slides or expose the sample once the device has been inoculated. By combining both growth and observation into one fully enclosed system, the InTray™ increases throughput while decreasing the cost of laboratory materials and medical waste. The InTray™ design lends itself to high performance in laboratory and controlled point-of-care settings as well as off-site locations or austere environments. Both InTray™ devices are fully enclosed systems and do not require any reagents or complicated procedures to inoculate or obtain presumptive results. Visual Morphology Results on the InTray™ Chocolate Eugon and InTray™ Timoney’s CEM: Taylorella equigenitalis - Small, beige or yellow-grey colored colonies after 48 hours, 3-4 mm diameter colonies after five days QUALITY CONTROL At the time of manufacture, quality control testing is performed on each lot of the InTray™ Chocolate Eugon and InTray™ Timoney’s CEM using ATCC strains to ensure viability and sterility. These tests are repeated through the end of the product shelf life by BioMed Diagnostics confirming the ability to support growth while maintaining specificity. BACKGROUND Contagious Equine Metritis is a venereal transmitted bacterial infection caused by Taylorella equigenitalis. Infection is characterized in mares with temporary infertility resulting in an early return to oestrus following vaginal discharge within a few days of mating. Stallions generally show no signs of infection. Infected mares generally display characteristic mucopurulent discharge 36-72 hours after mating. The severity of infection is variable however, and symptoms may remain absent for up to three to four weeks after infection. This organism is slow growing and requires medium containing blood as well as a humid, CO2 environment to grow in the lab. Due to the occurrence of Taylorella strains sensitive to antibiotics, it is advisable to inoculate a non-selective medium, such as the InTray™ Chocolate Eugon, in parallel with a more selective medium, such as the InTray™ Timoney’s CEM. 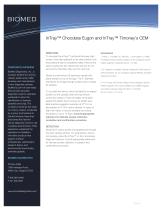 InTray™ Chocolate Eugon and InTray™ Timoney’s CEM CORPORATE OVERVIEW BioMed Diagnostics, Inc., a boutique biotech firm and an industry leader since 1989, develops and manufactures in vitro diagnostic devices. BioMed’s point-of-care ready tests provide accurate diagnostic tools for scientists worldwide to aid in the identification of bacteria, parasites and fungi. The company formed as the result of a mercy mission conducted by a group of physicians to Central America; there they discovered the need for robust diagnostic tools for use in austere environments. Their experience unleashed...