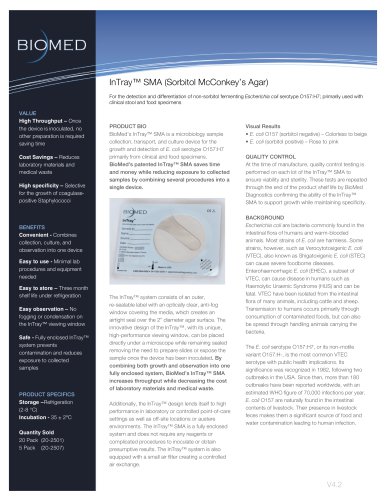 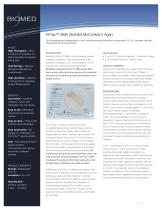 VALUE High Throughput – Once the device is inoculated, no other preparation is required saving time Cost Savings – Reduces laboratory materials and medical waste High specificity – Selective for the growth of coagulasepositive Staphylococci InTray™ SMA (Sorbitol McConkey’s Agar) For the detection and differentiation of non-sorbitol fermenting Escherichia coli serotype O157:H7; primarily used with clinical stool and food specimens PRODUCT BIO BioMed’s InTray™ SMA is a microbiology sample collection, transport, and culture device for the growth and detection of E. coli serotype O157:H7 primarily from clinical and food specimens. BioMed’s patented InTray™ SMA saves time and money while reducing exposure to collected samples by combining several procedures into a single device. BENEFITS Convenient - Combines collection, culture, and observation into one device Easy to use - Minimal lab procedures and equipment needed Easy to store – Three month shelf life under refrigeration Easy observation – No fogging or condensation on the InTray™ viewing window Safe - Fully enclosed InTray™ system prevents contamination and reduces exposure to collected samples PRODUCT SPECIFICS Storage –Refrigeration (2-8 °C) Incubation - 35 ± 2ºC Quantity Sold 20 Pack (20-2501) 5 Pack (20-2507) The InTray™ system consists of an outer, re-sealable label with an optically clear, anti-fog window covering the media, which creates an airtight seal over the 2” diameter agar surface. The innovative design of the InTray™, with its unique, high-performance viewing window, can be placed directly under a microscope while remaining sealed removing the need to prepare slides or expose the sample once the device has been inoculated. By combining both growth and observation into one fully enclosed system, BioMed’s InTray™ SMA increases throughput while decreasing the cost of laboratory materials and medical waste. Additionally, the InTray™ design lends itself to high performance in laboratory or controlled point-of-care settings as well as off-site locations or austere environments. The InTray™ SMA is a fully enclosed system and does not require any reagents or complicated procedures to inoculate or obtain presumptive results. The InTray™ system is also equipped with a small air filter creating a controlled air exchange. Visual Results • E. coli O157 (sorbitol negative) – Colorless to beige • E. coli (sorbitol positive) – Rose to pink QUALITY CONTROL At the time of manufacture, quality control testing is performed on each lot of the InTray™ SMA to ensure viability and sterility. These tests are repeated through the end of the product shelf life by BioMed Diagnostics confirming the ability of the InTray™ SMA to support growth while maintaining specificity. BACKGROUND Escherichia coli are bacteria commonly found in the intestinal flora of humans and warm-blooded animals. Most strains of E. coli are harmless. Some strains, however, such as Verocytotoxigenic E. coli (VTEC), also known as Shigatoxigenic E. coli (STEC) can cause severe foodborne diseases. Enterohaemorrhagic E. coli (EHEC), a subset of VTEC, can cause disease in humans such as Haemolytic Uraemic Syndrome (HUS) and can be fatal. VTEC have been isolated from the intestinal flora of many animals, including cattle and sheep. Transmission to humans occurs primarily through consumption of contaminated foods, but can also be spread through handling animals carrying the bacteria. The E. coli serotype O157:H7, or its non-motile variant O157:H-, is the most common VTEC serotype with public health implications. Its significance was recognized in 1982, following two outbreaks in the USA. Since then, more than 180 outbreaks have been reported worldwide, with an estimated WHO figure of 70,000 infections per year. E. coli O157 are naturally found in the intestinal contents of livestock. Their presence in livestock feces makes them a significant source of food 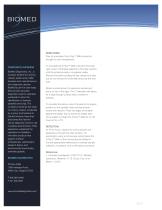 CORPORATE OVERVIEW BioMed Diagnostics, Inc., a boutique biotech firm and an industry leader since 1989, develops and manufactures in vitro diagnostic devices. BioMed's point-of-care ready tests provide accurate diagnostic tools for scientists worldwide to aid in the identification of bacteria, parasites and fungi. The company formed as the result of a mercy mission conducted by a group of physicians to Central America; there they discovered the need for robust diagnostic tools for use in austere environments. Their experience unleashed the inspiration for BioMed's innovative products...