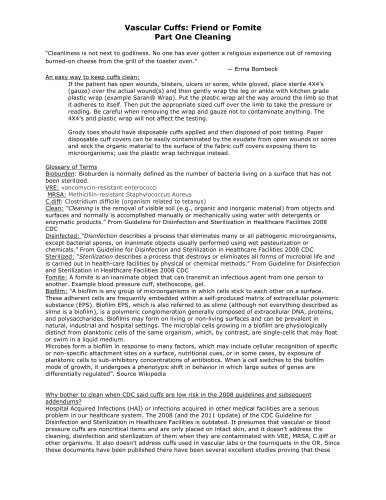 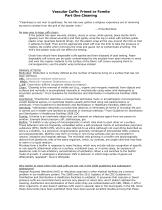 Vascular Cuffs: Friend or Fomite Part One Cleaning “Cleanliness is not next to godliness. No one has ever gotten a religious experience out of removing burned-on cheese from the grill of the toaster oven.” ― Erma Bombeck An easy way to keep cuffs clean: If the patient has open wounds, blisters, ulcers or sores, while gloved, place sterile 4X4’s (gauze) over the actual wound(s) and then gently wrap the leg or ankle with kitchen grade plastic wrap (example Saran® Wrap). Put the plastic wrap all the way around the limb so that it adheres to itself. Then put the appropriate sized cuff over the limb to take the pressure or reading. Be careful when removing the wrap and gauze not to contaminate anything. The 4X4’s and plastic wrap will not affect the testing. Grody toes should have disposable cuffs applied and then disposed of post testing. Paper disposable cuff covers can be easily contaminated by the exudate from open wounds or sores and wick the organic material to the surface of the fabric cuff covers exposing them to microorganisms; use the plastic wrap technique instead. Glossary of Terms Bioburden: Bioburden is normally defined as the number of bacteria living on a surface that has not been sterilized. VRE: vancomycin-resistant enterococci MRSA: Methicillin-resistant Staphylococcus Aureus C.diff: Clostridium difficile (organism related to tetanus) Clean: “Cleaning is the removal of visible soil (e.g., organic and inorganic material) from objects and surfaces and normally is accomplished manually or mechanically using water with detergents or enzymatic products.” From Guideline for Disinfection and Sterilization in Healthcare Facilities 2008 CDC Disinfected: “Disinfection describes a process that eliminates many or all pathogenic microorganisms, except bacterial spores, on inanimate objects usually performed using wet pasteurization or chemicals.” From Guideline for Disinfection and Sterilization in Healthcare Facilities 2008 CDC Sterilized: “Sterilization describes a process that destroys or eliminates all forms of microbial life and is carried out in health-care facilities by physical or chemical methods.” From Guideline for Disinfection and Sterilization in Healthcare Facilities 2008 CDC Fomite: A fomite is an inanimate object that can transmit an infectious agent from one person to another. Example blood pressure cuff, stethoscope, gel. Biofilm: “A biofilm is any group of microorganisms in which cells stick to each other on a surface. These adherent cells are frequently embedded within a self-produced matrix of extracellular polymeric substance (EPS). Biofilm EPS, which is also referred to as slime (although not everything described as slime is a biofilm), is a polymeric conglomeration generally composed of extracellular DNA, proteins, and polysaccharides. Biofilms may form on living or non-living surfaces and can be prevalent in natural, industrial and hospital settings. The microbial cells growing in a biofilm are physiologically distinct from planktonic cells of the same organism, which, by contrast, are single-cells that may float or swim in a liquid medium. Microbes form a biofilm in response to many factors, which may include cellular recognition of specific or non-specific attachment sites on a surface, nutritional cues, or in some cases, by exposure of planktonic cells to sub-inhibitory concentrations of antibiotics. When a cell switches to the biofilm mode of growth, it undergoes a phenotypic shift in behavior in which large suites of genes are differentially regulated”. Source Wikipedia Why bother to clean when CDC said cuffs are low risk in the 2008 guidelines and subsequent addendums? Hospital Acquired Infections (HAI) or infections acquired in other medical facilities are a serious problem in our healthcare system. The 2008 (and the 2011 Update) of the CDC Guideline for Disinfection and Sterilization in Healthcare Facilities is outdated. It presumes that vascular or blood pressure cuffs are noncritical items and are only placed on intact skin, and it doesn’t address the cleaning, disinfection and sterilization of them when they are contaminated with VRE, MRSA, C.diff or other organisms. It also doesn’t address cuffs used in vascular labs or the tourniquets in the OR. Since these documents have been published there have been several excellent studies proving that these 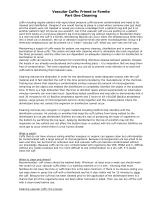 Vascular Cuffs: Friend or Fomite Part One Cleaning cuffs including regular patient vital signs blood pressure cuffs become contaminated and need to be cleaned and disinfected. Imagine if you would having to sleep in a bed where someone else just slept and the sheets were not cleaned or would you remove a bandage from a patient’s leg and put it on another patient’s leg? Of course you wouldn’t, but if the vascular cuff you are putting on a patient went from being on a previous patient’s leg to this patient’s leg without cleaning or disinfection there is a real risk that the cuff is a fomite.... 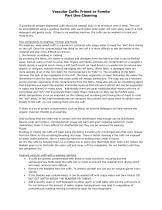 Vascular Cuffs: Friend or Fomite Part One Cleaning If possible all straight segmental cuffs should be washed daily or at minimum once a week. This can be accomplished using a washing machine with warm water (cold water will work also), soap or a mild detergent and gentle cycle. If there is no washing machine, the cuffs can be washed in a sink and hung to dry. Two components to cleaning: Friction and Fluids Pre-washing: keep soiled cuffs in a bucket or container with soapy water to keep the “soil” from drying on the cuff. Once the contamination has dried on the cuff it is more difficult to... 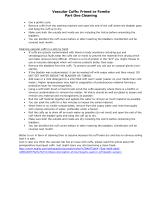 Vascular Cuffs: Friend or Fomite Part One Cleaning • • • • Use a gentle cycle. Remove cuffs from the washing machine and open the end of the cuff where the bladder goes and hang the cuff up to dry. Make sure both the outside and inside are dry including the Velcro before reinserting the bladders. You can disinfect the cuff covers before or after inserting the bladders. Disinfection will be covered next month. Cleaning vascular cuffs in a sink by hand • If cuffs are grossly contaminated with blood or body secretions including pus and serosanguinous fluids keep the cuffs wet or moist to...