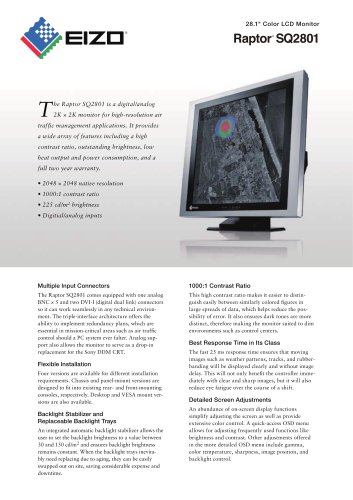 The Raptor SQ2801 is a digital/analog 2K x 2K monitor for high-resolution air traffic management applications. It provides a wide array of features including a high contrast ratio, outstanding brightness, low heat output and power consumption, and a full two year warranty. • 2048 x 2048 native resolution • 1000:1 contrast ratio • 225 cd/m2 brightness • Digitial/analog inputs Multiple Input Connectors The Raptor SQ2801 comes equipped with one analog BNC x 5 and two DVI-I (digital dual link) connectors so it can work seamlessly in any technical environment. The triple-interface architecture offers the ability to implement redundancy plans, which are essential in mission-critical areas such as air traffic control should a PC system ever falter. Analog support also allows the monitor to serve as a drop-in replacement for the Sony DDM CRT. Flexible Installation Four versions are available for different installation requirements. Chassis and panel-mount versions are designed to fit into existing rear- and front-mounting consoles, respectively. Desktop and VESA mount versions are also available. Backlight Stabilizer and Replaceable Backlight Trays An integrated automatic backlight stabilizer allows the user to set the backlight brightness to a value between 30 and 150 cd/m2 and ensures backlight brightness remains constant. When the backlight trays inevitably need replacing due to aging, they can be easily swapped out on site, saving considerable expense and downtime. 1000:1 Contrast Ratio This high contrast ratio makes it easier to distinguish easily between similarly colored figures in large spreads of data, which helps reduce the possibility of error. It also ensures dark tones are more distinct, therefore making the monitor suited to dim environments such as control centers. Best Response Time in Its Class The fast 25 ms response time ensures that moving images such as weather patterns, tracks, and rubberbanding will be displayed clearly and without image delay. This will not only benefit the controller immediately with clear and sharp images, but it will also reduce eye fatigue over the course of a shift. Detailed Screen Adjustments An abundance of on-screen display functions simplify adjusting the screen as well as provide extensive color control. A quick-access OSD menu allows for adjusting frequently used functions like brightness and contrast. Other adjustments offered in the more detailed OSD menu include gamma, color temperature, sharpness, image position, and backlight control.

Raptor* SQ2801 Multiple Resolution Support and Image Scaling The Raptor SQ2801 supports resolutions from 640 x 480 up to its native resolution of 2048 x 2048. Any non-native resolution can be displayed in its actual size, scaled proportionately, or expanded to fill the screen. This is helpful when using the monitor’s single link input or receiving other non-native resolutions as is typically necessary for setup. It also means a smaller auxiliary monitor is not necessary to view boot data or failure data. Heat Output and Power Consumption The heat produced by a monitor is a key factor in...