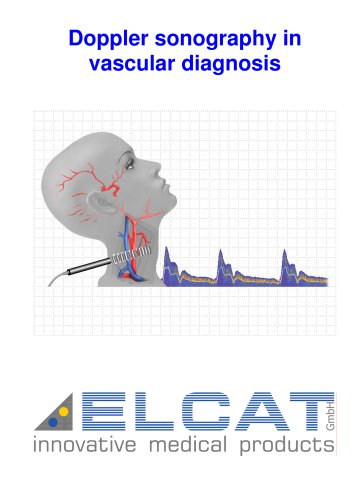 Doppler Sonography in Vascular diagnosi Amongst angiologists, the great importance of Doppler sonography in vascular diagnosis has been undisputed for many years. For example, in his preface to a collection of papers published by Thieme in 1978, Bol linger/Zurich wrote: "Ultrasound Doppler technology represents the greatest enhancement in angiological diagnostics in the last 10 years". In the preface to his book "Praktische Dopplersonographie (Practical Doppler sonography)" published in 1984, M. Marshall/Munich demanded ."...that this method should be adopted as widely as In the meantime,...

Physical principles 1. The speed at which waves spread or the speed of sound depends on the elasticity and molecule density of the medium. Here are some examples: Air Water Soft tissue Bone 330 1.480 approx. 2.700 — 1.540 4.100 m/s m/s m/s m/s Sound waves - created by oscillating bodies — spread in the form of cyclical pressure differences and the speed at which they spread is material specific. If a body is oscillating quite slowly, the distance between the pressure zones, the so-called wave length, is large. The human ear picks up this oscillation as a deep note. In contrast, a body which...

Physical principles 1. Generating Ultrasound 1.2. Thin slices made of quartz crystal are used to generate the extremely high frequencies between 1 and 10 MHz used for medical diagnostic purposes (Fig. 1.2.1). Fig. 1.2.2. Changes in spatial expansion of a quartz crystal grid by changing voltage polarity The mechanical movements of the crystal follow the voltage polarity virtually with no inertia. If a constantly reversing polarity is generated using an alternating current generator, the crystal changes size in the rhythm of the alternating voltage. The crystal therefore is turned into an...

Physical principles The Doppler Effect The Doppler effect is named after the Austrian mathematician and physicist Christian Johann Doppler (1805-1853). Doppler had observed that the light spectrum of a celestial body which is approaching the observer was displaced to the blue end of the spectrum, i.e. it reached the Earth with a short wavelength, whereas the light spectrum of the same celestial body which was now moving away from the observer was displaced to the red end of the spectrum and therefore arrived at the Earth with a longer wavelength (Fig. 1.3.1). Based on this observation, in...

Physical principles starting position Displacement ot (he frequency Que lo a decrease or increase in wauele direcllon ol movement relative to the recipient. Mie displacement in treg The next example shows the starting position of the tuning fork which is moving to the right tuning fork are oscillating to the outside and generating the excess pressure zone Ih due the movemenl ol the iransmiiter RM>. Depending on tlie labelled with "1" and which is now spreading through the medium at the speed of sound. One millisecond later the prongs of the tuning fork are swinging outwards again and are...

Physical principles labelled with “2“. Due to its inherent speed the tuning fork has moved 5.5 cm with the same period of 1 millisecond. This means that the 2nd area of pressure was generated 5.5 cm to the right relative to the starting position. Therefore the wavelength on the right hand side is decreased by 5.5 cm to only 27.5 cm. In contrast, the wavelength on the left hand side increases by 5.5 cm to 38.5 cm. If the tuning fork stays at the same speed, a sound field is generated on the right hand side, the wavelength of which is only 27.5 cm, whereas a sound field is created on the left...

Open the catalog to page 14