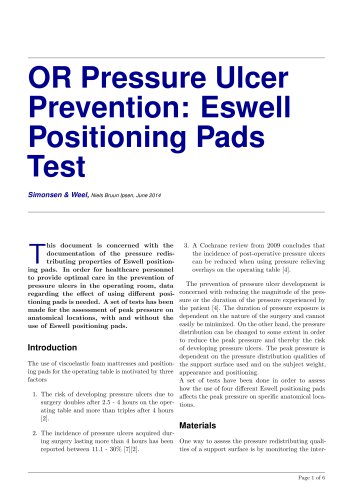 Figure 1: an example of a pressure prole produced by the XSENSOR face pressure between subject and surface. Several systems for this kind of measurement exist. The choice of system for the measurements done is the XSENSOR Pressure Imaging System, XSENSOR Technology Corporation. The XSENSOR X3 Pro have the following specications For these measurements, the XSENSOR system was used to monitor the peak interface pressure between subject and support surface, including positioning pads. A number of test subjects were placed on the operating table in the supine position, with and without an Eswell...

Positioning Pad Tests 1 Leg Positioning Pad 1.1 Objective Table 1: Summarized data with 95% condence intervals. The average peak pressure on specic anatomical areas of the test subjects are shown for the situation with and without the leg positioning pad. No Pad [mmHg] Pad [mmHg] An Eswell leg positioning pad for the operating table is supposed to relieve pressure on the heels by posi- Heel 45.6±3.1 0 tioning them free owing above the operating table Sacrum 41.1±2.6 42.5±1.3 mattress. This will remove the risk of developing Shoulders 33.8±4.2 33.5±3.5 pressure ulcers on the heels, but does...

Table 2: Summarized data with 95% condence intervals. The average peak pressure on specic anatomiA number of n = 10 test persons have been used cal areas of the test subjects are shown for the to monitor peak interface pressure on anatomical situation with and without the head pad. locations with and without the use of the head pad. Test subjects are placed on an operating table with Eswell operating table mattresses and the XSENSOR pressure grid on top. Peak pressure on the head, shoulders, sacrum and heels is recorded using 10200mmHg XSENSOR calibration. Head Shoulders Sacrum Heels 3.1...

Table 3: Summarized data with 95% condence intervals. The average peak pressure on specic anatomical areas of the test subjects are shown for the situation with and without the round pad. Heels Knees Sacrum Shoulders of 10mmHg, but here it has been assumed to be 10mmHg as a conservative estimate. A paired t-test for the dierence in mean peak pressure was done for the heels, knees, sacrum and shoulders. The pressure on the heels increased signicantly with the use of the round pad from 39.1±2.6mmHg to 52.8±5.2mmHg, t(7) = 7.174, p < 0.0005. This means that the use of the round pad increases...

All Eswell catalogs and technical brochures