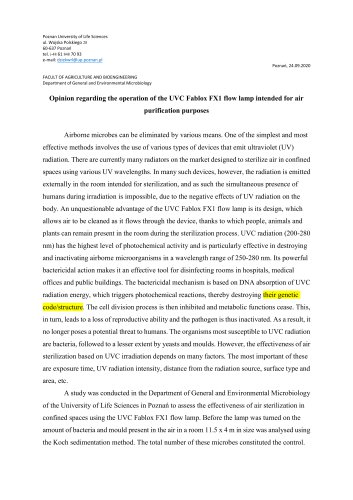 Poznan University of Life Sciences ul. Wojska Polskiego 28 60-637 Poznań tel. i-48 61 848 70 93 e-mail: dziekwrl@up.poznan.pl Poznań, 24.09.2020 FACULT OF AGRICULTURE AND BIOENGINEERING Department of General and Environmental Microbiology Opinion regarding the operation of the UVC Fablox FX1 flow lamp intended for air purification purposes Airborne microbes can be eliminated by various means. One of the simplest and most effective methods involves the use of various types of devices that emit ultraviolet (UV) radiation. There are currently many radiators on the market designed to sterilize air in confined spaces using various UV wavelengths. In many such devices, however, the radiation is emitted externally in the room intended for sterilization, and as such the simultaneous presence of humans during irradiation is impossible, due to the negative effects of UV radiation on the body. An unquestionable advantage of the UVC Fablox FX1 flow lamp is its design, which allows air to be cleaned as it flows through the device, thanks to which people, animals and plants can remain present in the room during the sterilization process. UVC radiation (200-280 nm) has the highest level of photochemical activity and is particularly effective in destroying and inactivating airborne microorganisms in a wavelength range of 250-280 nm. Its powerful bactericidal action makes it an effective tool for disinfecting rooms in hospitals, medical offices and public buildings. The bactericidal mechanism is based on DNA absorption of UVC radiation energy, which triggers photochemical reactions, thereby destroying their genetic code/structure. The cell division process is then inhibited and metabolic functions cease. This, in turn, leads to a loss of reproductive ability and the pathogen is thus inactivated. As a result, it no longer poses a potential threat to humans. The organisms most susceptible to UVC radiation are bacteria, followed to a lesser extent by yeasts and moulds. However, the effectiveness of air sterilization based on UVC irradiation depends on many factors. The most important of these are exposure time, UV radiation intensity, distance from the radiation source, surface type and area, etc. A study was conducted in the Department of General and Environmental Microbiology of the University of Life Sciences in Poznań to assess the effectiveness of air sterilization in confined spaces using the UVC Fablox FX1 flow lamp. Before the lamp was turned on the amount of bacteria and mould present in the air in a room 11.5 x 4 m in size was analysed using the Koch sedimentation method. The total number of these microbes constituted the control.

The Fablox FX1 flow lamp was then switched on in continuous operation mode for 0.5 h, 1 h, 2 h, 3 h and 4 h. While the lamp was in operation, the room was used for normal purposes by several people moving around in it. After each time interval, the number of microorganisms in the air was calculated at different distances from the device (2 m, 5 m and 7 m). The results indicate a significant difference between the amount of bacteria and mould fungi present in the air before the lamp was switched on and the amount present after its operation. Based on these results, it was found that the...