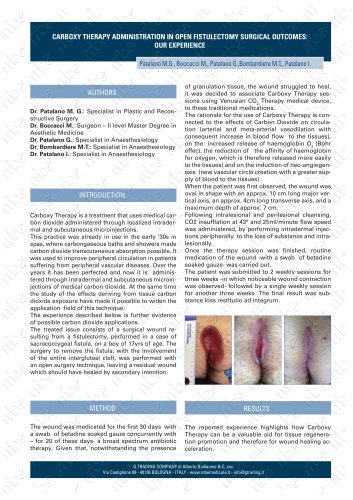 CARBOXY THERAPY ADMINISTRATION IN OPEN FISTULECTOMY SURGICAL OUTCOMES: OUR EXPERIENCE Patalano M.G., Boccacci M., Patalano G.,Bombardiere M.T., Patalano I. AUTHORS Dr. Patalano M. G.: Specialist in Plastic and Reconstructive Surgery Dr. Boccacci M.: Surgeon – II level Master Degree in Aesthetic Medicine Dr. Patalano G.: Specialist in Anaesthesiology Dr. Bombardiere M.T.: Specialist in Anaesthesiology Dr. Patalano I.: Specialist in Anaesthesiology INTRODUCTION Carboxy Therapy is a treatment that uses medical carbon dioxide administered through localized intraderMATERIALS USED mal and subcutaneous microinjections. This practice was already in use in the early ‘30s in spas, where carbongaseous baths and showers made carbon dioxide transcutaneous absorption possible. It was used to improve peripheral circulation in patients suffering from peripheral vascular diseases. Over the years it has been perfected and now it is administered through intradermal and subcutaneous microinjections of medical carbon dioxide. At the same time the study of the effects deriving from tissue carbon dioxide exposure have made it possible to widen the application ﬁeld of this technique. The experience described below is further evidence of possible carbon dioxide applications. The treated issue consists of a surgical wound resulting from a ﬁstulectomy, performed in a case of sacrococcygeal ﬁstula, on a boy of 17yrs of age. The surgery to remove the ﬁstula, with the involvement of the entire intergluteal cleft, was performed with an open surgery technique, leaving a residual wound which should have healed by secondary intention. METHOD The wound was medicated for the ﬁrst 30 days with a swab of betadine soaked gauze concurrently with – for 20 of these days- a broad spectrum antibiotic therapy. Given that, notwithstanding the presence of granulation tissue, the wound struggled to heal, METHOD it was decided to associate Carboxy Therapy sessions using Venusian CO2 Therapy medical device, to these traditional medications. The rationale for the use of Carboxy Therapy is connected to the effects of Carbon Dioxide on circulation (arterial and meta-arterial vasodilation with consequent increase in blood ﬂow to the tissues), on the increased release of haemoglobin O2 (Bohr effect, the reduction of the afﬁnity of haemoglobin for oxygen, which is therefore released more easily to the tissues) and on the induction of neo-angiogenesis (new vascular circle creation with a greater supply of blood to the tissues) When the patient was ﬁrst observed, the wound was oval in shape with an approx. 10 cm long major vertical axis, an approx. 4cm long transverse axis, and a maximum depth of approx. 7 cm. Following intralesional and perilesional cleansing, CO2 insufﬂation at 43° and 25ml/minute ﬂow speed was administered, by performing intradermal injections peripherally to the loss of substance and intralesionally. Once the therapy session was ﬁnished, routine medication of the wound -with a swab of betadine soaked gauze- was carried out. The patient was submitted to 2 weekly sessions for three weeks -in which noticeable wound contraction was observed- followed by a single weekly session for another three weeks. The ﬁnal result was substance loss restitutio ad integrum. RESULTS RESULTS The reported experience highlights how Carboxy Therapy can be a valuable aid for tissue regeneration promotion and therefore for wound healing acceleration. G.TRADING COMPANY di Alberto Guillaume & C. snc Via Castiglione 99 - 40136 BOLOGNA - ITALY - www.mbeme