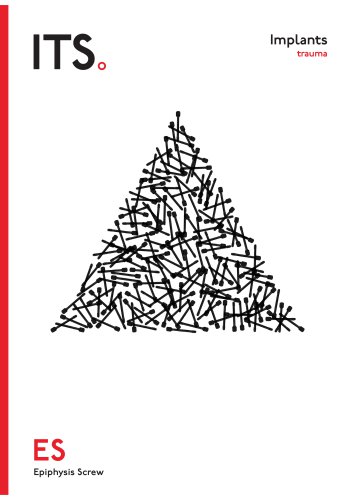 Preface The Epiphysis Screw of ITS. was especially developed for the Slipped Capital Femoral Epiphysis (SCFE) disease. Stabilization using screws is minimally invasive according to today‘s standard. With respect to the blood circulation of the neck of the femur, it is advantageous to use a single central screw, and this reduces the risk of a perforated joint. Such a screw must fulfill two conditions. On the one hand, it has to sufficiently stabilise the epiphysis of the head of the femur to enable at least partial stress. On the other hand, it should hold the epiphysis by means of a short...

Indications & Contraindications Indications: • The indication for the use of a transcutaneous screw holds for all acute, acute to chronic and chronic loosening of the epiphysis. • Another area of application is the transcutaneous or open screwing of fractures of the femoral head in childhood and other transcutaneous stabilisations by means of screws, where the screws have to be prevented from setting into the bony tissue but percutaneous removal is allowed. Contraindications: • The screw connection of an epiphysiolysis (attachment of a foreign body) in the context of a septic joint...

Surgical Technique - Fourth Step • Using the measuring device, the length of the appropriate hollow screw is determined. • It is necessary, however, to take the distance from the joint into account and therefore to choose a screw some 0.5cm longer since the Kirschner Wire stops about 1cm in front of the joint cavity. Surgical Technique - Fifth Step • Screw in the hollow screw above the guide wire under observation from the image intensifiers in both planes. • Care must be taken not to perforate the joint.

Surgical Technique - Sixth Step • Screw out the guide wire • Release the leg • Check mobility using the image intensifiers. • Care must be taken not to perforate the joint! • It is important not to countersink the bolt head into the bone, otherwise the easy percutaneous removeableness will not be able. • Because of the short screw thread you can use the screw as a „dynamic“ one. • This means that you should retighten the screw due to the growth. • For that the head of the screw must stick out from the bone 0.5 - 1cm.

Attaching the screw on the other side • The same procedure as in the steps of the operation, except that the guide wire is inserted parallel to the Kirschner Wire fastened to the skin distal to the Tuberculum inominatum. Explantation • Removal of the epiphysis screw is carried out after closure of the grwoth groove and checked using the image intensifiers and is carried out percutaneously. • A guide wire starting from the scar of the screw attachment is introduced into the funnel shaped screw head of the epiphysis screw and the latter removed by means of the socket wrench, WS 10, L=250mm...

All I.T.S. catalogs and technical brochures