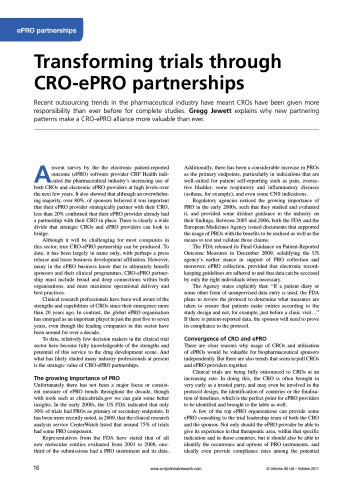 ePRO partnerships Transforming trials through CRO-ePRO partnerships Recent outsourcing trends in the pharmaceutical industry have meant CROs have been given more responsibility than ever before for complete studies. Gregg Jewett explains why new partnering patterns make a CRO-ePRO alliance more valuable than ever. Arecent survey by the the electronic patient-reported outcome (ePRO) software provider CRF Health indi- cated the pharmaceutical industry's increasing use of both CROs and electronic ePRO providers at high levels over the next few years. It also showed that although an overwhelm- ing majority, over 80%, of sponsors believed it was important that their ePRO provider strategically partner with their CRO, less than 20% confirmed that their ePRO provider already had a partnership with their CRO in place. There is clearly a wide divide that strategic CROs and ePRO providers can look to Although it will be challenging for most companies in this sector, true CRO-ePRO partnership can be produced. To date, it has been largely in name only, with perhaps a press release and loose business development affiliation. However, many in the ePRO business know that to ultimately benefit sponsors and their clinical programmes, CRO-ePRO partner- ship must include broad and deep connections within both organisations, and must maximise operational delivery and best practices. Clinical research professionals have been well aware of the strengths and capabilities of CROs since their emergence more than 20 years ago. In contrast, the global ePRO organisation has emerged as an important player in just the past five to seven years, even though the leading companies in this sector have been around for over a decade. To date, relatively few decision makers in the clinical trial sector have become fully knowledgeable of the strengths and potential of this service to the drug development scene. And what has likely eluded many industry professionals at present is the strategic value of CRO-ePRO partnerships. Unfortunately there has not been a major focus or consist- ent measure of ePRO trends throughout the decade, though with tools such as clinicaltrials.gov we can gain some better insights. In the early 2000s, the US FDA indicated that only 30% of trials had PROs as primary or secondary endpoints. It has been more recently noted, in 2009, that the clinical research analysis service CenterWatch listed that around 75% of trials Representatives from the FDA have stated that of all new molecular entities evaluated from 2003 to 2008, one- third of the submissions had a PRO instrument and its data. Additionally, there has been a considerable increase in PROs as the primary endpoints, particularly in indications that are well-suited for patient self-reporting such as pain, overac- tive bladder, some respiratory and inflammatory diseases (asthma, for example), and even some CNS indications. Regulatory agencies noticed the growing importance of PRO in the early 2000s, such that they studied and evaluated it, and provided some distinct guidance to the industry on their findings. Between 2005 and 2006, both the FDA and the European Medicines Agency issued documents that supported the usage of PROs with the benefits to be realised as well as the means to test and validate those claims. The FDA released its Final Guidance on Patient-Reported Outcome Measures in December 2009, solidifying the US agency's earlier stance in support of PRO collection and moreover, ePRO collection, provided that electronic record- keeping guidelines are adhered to and that data can be accessed by only the right individuals when necessary. The Agency states explicitly that: "If a patient diary or some other form of unsupervised data entry is used, the FDA plans to review the protocol to determine what measures are taken to ensure that patients make entries according to the study design and not, for example, just before a clinic visit..." If there is patient-reported data, the sponsor will need to prove There are clear reasons why usage of CROs and utilisation of ePROs would be valuable for biopharmaceutical sponsors independently. But there are also trends that seem to pull CROs and ePRO providers together. Clinical trials are being fully outsourced to CROs at an increasing rate. In doing this, the CRO is often brought in very early as a trusted party, and may even be involved in the protocol design, the identification of countries or the finalisa- tion of timelines, which is the perfect point for ePRO providers to be identified and brought to the table as well. A few of the top ePRO organisations can provide some ePRO consulting to the trial leadership team of both the CRO and the sponsor. Not only should the ePRO provider be able to give its experience in that therapeutic area, within that specific indication and in those countries, but it should also be able to identify the occurrence and options of PRO instruments, and ideally even provide compliance rates among the potential

ePRO partnerships The interplay is not simply necessary of the data systems themselves, but of the people that are building, monitoring and managing these critical systems as well patient population and in the selected countries. Just as sponsor companies have looked to partner with CROs in order to facilitate and optimise the interaction between the two, ePRO providers need to do the same. Operational stand- ards and best practices need to be developed and employed by the CRO and the ePRO provider jointly, and built up as early as possible, in order to set the stage for smooth operations...