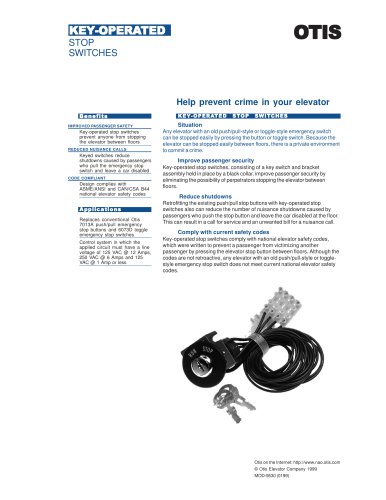 KEY-OPERATED KEY-OPERATED STOP SWITCHES Help prevent crime in your elevator Benefits IMPROVED PASSENGER SAFETY Key-operated stop switches prevent anyone from stopping the elevator between floors REDUCED NUISANCE CALLS Keyed switches reduce shutdowns caused by passengers who pull the emergency stop switch and leave a car disabled CODE COMPLIANT Design complies with ASME/ANSI and CAN/CSA B44 national elevator safety codes Applications Replaces conventional Otis 7013A push/pull emergency stop buttons and 6073D toggle emergency stop switches Control system in which the applied circuit must have a line voltage of 125 VAC @ 12 Amps, 250 VAC @ 6 Amps and 125 VAC @ 1 Amp or less KEY-OPERATED KEY-OPERATED SWITCHES SWIT CHES Situation Any elevator with an old push/pull-style or toggle-style emergency switch can be stopped easily by pressing the button or toggle switch. Because the elevator can be stopped easily between floors, there is a private environment to commit a crime. Improve passenger security Key-operated stop switches, consisting of a key switch and bracket assembly held in place by a black collar, improve passenger security by eliminating the possibility of perpetrators stopping the elevator between floors. Reduce shutdowns Retrofitting the existing push/pull stop buttons with key-operated stop switches also can reduce the number of nuisance shutdowns caused by passengers who push the stop button and leave the car disabled at the floor. This can result in a call for service and an unwanted bill for a nuisance call. Comply with current safety codes Key-operated stop switches comply with national elevator safety codes, which were written to prevent a passenger from victimizing another passenger by pressing the elevator stop button between floors. Although the codes are not retroactive, any elevator with an old push/pull-style or togglestyle emergency stop switch does not meet current national elevator safety codes. Otis on the Internet: http://www.nao.otis.com © Otis Elevator Company 1999 MOD-9530 (0199)

All Otis catalogs and technical brochures