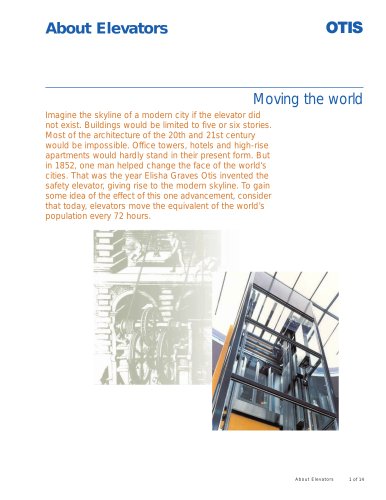 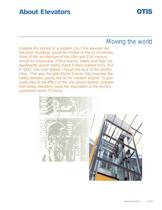 About Elevators Moving the world Imagine the skyline of a modern city if the elevator did not exist. Buildings would be limited to five or six stories. Most of the architecture of the 20th and 21st century would be impossible. Office towers, hotels and high-rise apartments would hardly stand in their present form. But in 1852, one man helped change the face of the world’s cities. That was the year Elisha Graves Otis invented the safety elevator, giving rise to the modern skyline. To gain some idea of the effect of this one advancement, consider that today, elevators move the equivalent of the world’s population every 72 hours. About Elevators 1 of 14 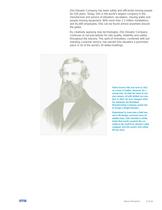 Otis Elevator Company has been safely and efficiently moving people for 150 years. Today, Otis is the world’s largest company in the manufacture and service of elevators, escalators, moving walks and people-moving equipment. With more than 1.2 million installations and 61,000 employees, Otis can be found almost anywhere around the globe. By creatively applying new technologies, Otis Elevator Company continues to set precedents for ride quality, reliability and safety throughout the industry. This spirit of innovation, combined with outstanding customer service, has earned Otis elevators a... 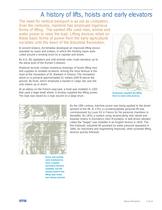 A history of lifts, hoists and early elevators The need for vertical transport is as old as civilization. Over the centuries, mankind has employed ingenious forms of lifting. The earliest lifts used man, animal and water power to raise the load. Lifting devices relied on these basic forms of power from the early agricultural societies until the dawn of the Industrial Revolution. In ancient Greece, Archimedes developed an improved lifting device operated by ropes and pulleys, in which the hoisting ropes were coiled around a winding drum by a capstan and levers. By A.D. 80, gladiators and... 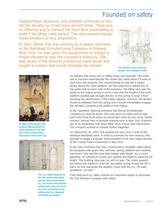 Founded on safety Despite these advances, one problem continued to trouble the elevator as it had since ancient times. There was no effective way to prevent the hoist from plummeting to earth if the lifting cable parted. This ever-present danger made elevators a risky proposition. In 1852, Elisha Otis was working as a master mechanic at the Bedstead Manufacturing Company in Yonkers, New York. He was given the assignment to design a freight elevator to haul the company’s products. Otis was aware of the inherent problem of cable failure and sought a solution that would eliminate the hazard.... 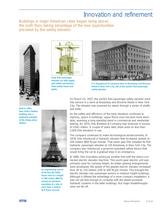 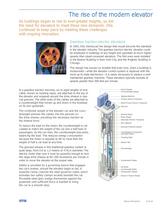 The rise of the modern elevator As buildings began to rise to ever-greater heights, so did the need for elevators to meet these new demands. Otis continued to keep pace by meeting these challenges with ongoing innovation. Gearless traction electric elevators In 1903, Otis introduced the design that would become the standard in the elevator industry. The gearless traction electric elevator could be employed in buildings of any height and operated at much higher speeds than steam-powered elevators. The first ones were installed in the Beaver Building in New York City, and the Majestic... 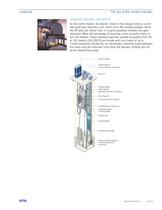 continued The rise of the modern elevator Geared traction elevators As the name implies, the electric motor in this design drives a wormand-gear-type reduction unit, which turns the hoisting sheave. While the lift rates are slower than in a typical gearless elevator, the gear reduction offers the advantage of requiring a less powerful motor to turn the sheave. These elevators typically operate at speeds from 38 to 152 meters (125-500 ft) per minute and carry loads of up to 13,600 kilograms (30,000 lb). An electrically controlled brake between the motor and the reduction unit stops the... 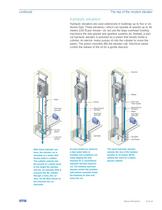 continued The rise of the modern elevator Hydraulic elevators Hydraulic elevators are used extensively in buildings up to five or six stories high. These elevators—which can operate at speeds up to 46 meters (150 ft) per minute—do not use the large overhead hoisting machinery the way geared and gearless systems do. Instead, a typical hydraulic elevator is powered by a piston that travels inside a cylinder. An electric motor pumps oil into the cylinder to move the piston. The piston smoothly lifts the elevator cab. Electrical valves control the release of the oil for a gentle descent.... 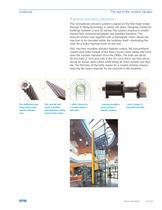 continued The rise of the modern elevator Machine roomless elevators This revolutionary elevator system is based on the first major breakthrough in lifting technology in nearly 100 years. Designed initially for buildings between 2 and 20 stories, this system employs a smaller sheave than conventional geared and gearless elevators. The reduced sheave size, together with a redesigned motor, allows the machine to be mounted within the hoistway itself—eliminating the need for a bulky machine room on the roof. Otis’ machine roomless elevator features unique, flat polyurethanecoated steel belts... 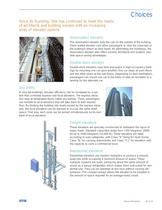 Choices Since its founding, Otis has continued to meet the needs of architects and building owners with an increasing array of elevator options. Observation elevator The observation elevator puts the cab on the outside of the building. Glass-walled elevator cars allow passengers to view the cityscape or the building’s atrium as they travel. By eliminating the hoistways, the observation elevator also offers owners, architects and builders valuable space-saving advantages. Double-deck elevator Double-deck elevators save time and space in high-occupancy buildings by mounting one car upon...

All Otis catalogs and technical brochures