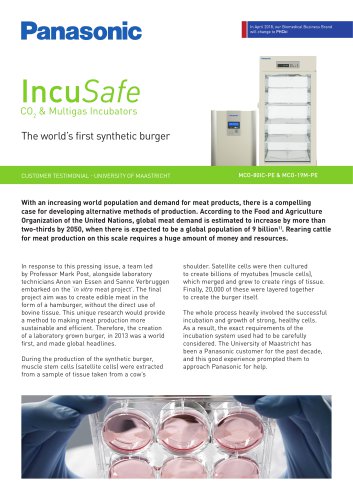 In April 2018, our Biomedical Business Brand will change to PHCbi IncuSafe CO2 & Multigas Incubators The world’s first ­ ynthetic burger s CUSTOMER TESTIMONIAL - UNIVERSITY OF MAASTRICHT With an increasing world population and demand for meat products, there is a compelling case for developing alternative methods of production. According to the Food and Agriculture Organization of the United Nations, global meat demand is estimated to increase by more than two-thirds by 2050, when there is expected to be a global population of 9 billion1). Rearing cattle for meat production on this scale requires a huge amount of money and resources. In response to this pressing issue, a team led by Professor Mark Post, alongside laboratory technicians Anon van Essen and Sanne Verbruggen embarked on the ‘in vitro meat project’. The final project aim was to create edible meat in the form of a hamburger, without the direct use of bovine tissue. This unique research would provide a method to making meat production more sustainable and efficient. Therefore, the creation of a laboratory grown burger, in 2013 was a world first, and made global headlines. During the production of the synthetic burger, muscle stem cells (satellite cells) were extracted from a sample of tissue taken from a cow’s shoulder. Satellite cells were then cultured to create billions of myotubes (muscle cells), which merged and grew to create rings of tissue. Finally, 20,000 of these were layered together to create the burger itself. The whole process heavily involved the successful incubation and growth of strong, healthy cells. As a result, the exact requirements of the incubation system used had to be carefully considered. The University of Maastricht has been a Panasonic customer for the past decade, and this good experience prompted them to approach Panasonic for

Considerations for incubation An initial consideration when selecting incubators for the in vitro meat project was the volume of cells to be cultured. The capability of holding high numbers of samples in a controlled environment was vital to the success of the project. Efficient environmental and temperature control was also crucial for effective incubation. The optimal environments for stem cell growth are those that most resemble the natural environment within the organism. For muscle stem cells, this means consistently low oxygen and high carbon dioxide concentrations (3% O2, 5% CO2) and...

high Level of accuracy by preserving temperature and gas set points over the entire system range. Temperature reliability was delivered by the Direct Heat and Air Jacket System combined with high density foam insulation and the construction of the incubators. This protects against condensation and helps to reduce the impact of ambient temperature fluctuations on the interior chamber. Gentle fan circulation delivers uniform temperatures to all cultures in the chamber regardless of their position - a huge benefit during this project, when thousands of individual samples were being cultivated...

Conclusion It is estimated that by 2050, the world demand for meat will have increased by 73%, thanks to rapidly growing population. Cooked and tasted in London on 5th August 2013, the burger was the first recognisable meat product created using a stem cell method, and was vital proof of concept for meat culturing techniques. Panasonic's reliable, efficient and controlled incubation systems used high levels of expert technology to ensure an optimum environment for the bovine cells used in this ground-breaking research. References 11 The State of Food and Agriculture: Livestock in the...