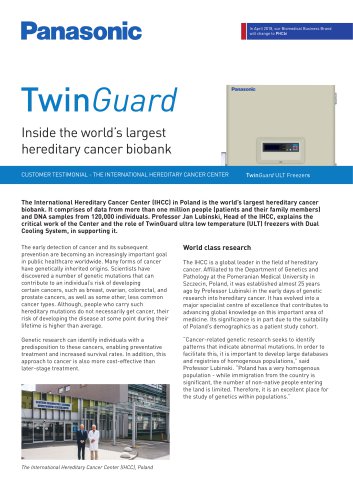 In April 2018, our Biomedical Business Brand will change to PHCbi TwinGuard Inside the world’s largest hereditary cancer biobank CUSTOMER TESTIMONIAL - THE INTERNATIONAL HEREDITARY CANCER CENTER The International Hereditary Cancer Center (IHCC) in Poland is the world’s largest hereditary cancer biobank. It comprises of data from more than one million people (patients and their family members) and DNA samples from 120,000 individuals. Professor Jan Lubinski, Head of the IHCC, explains the critical work of the Center and the role of TwinGuard ultra low temperature (ULT) freezers with Dual Cooling System, in supporting it. The early detection of cancer and its subsequent prevention are becoming an increasingly important goal in public healthcare worldwide. Many forms of cancer have genetically inherited origins. Scientists have discovered a number of genetic mutations that can contribute to an individual’s risk of developing certain cancers, such as breast, ovarian, colorectal, and prostate cancers, as well as some other, less common cancer types. Although, people who carry such hereditary mutations do not necessarily get cancer, their risk of developing the disease at some point during their lifetime is higher than average. World class research Genetic research can identify individuals with a predisposition to these cancers, enabling preventative treatment and increased survival rates. In addition, this approach to cancer is also more cost-effective than later-stage treatment. “Cancer-related genetic research seeks to identify patterns that indicate abnormal mutations. In order to facilitate this, it is important to develop large databases and registries of homogenous populations,” said Professor Lubinski. “Poland has a very homogenous population - while immigration from the country is significant, the number of non-native people entering the land is limited. Therefore, it is an excellent place for the study of genetics within populations.” The International Hereditary Cancer Center (IHCC), Poland The IHCC is a global leader in the field of hereditary cancer. Affiliated to the Department of Genetics and Pathology at the Pomeranian Medical University in Szczecin, Poland, it was established almost 25 years ago by Professor Lubinski in the early days of genetic research into hereditary cancer. It has evolved into a major specialist centre of excellence that contributes to advancing global knowledge on this important area of medicine. Its significance is in part due to the suitability of Poland’s demographics as a patient

CUSTOMER TESTIMONIAL - THE INTERNATIONAL HEREDITARY CANCER CENTER TwinGuard ULT Freezers A pioneer in advanced research into heredity cancer Professor Lubinski, Head of the IHCC and the Department of Genetics and Pathology at the Pomeranian Medical University, is the driving force behind the development of the facility. As one of the world's leading experts in hereditary cancer, Professor Lubinski, has studied and worked as a geneticist specialized in oncology in many countries, including Poland, France and the USA. He is a leading figure in both European Union and global initiatives on...

CUSTOMER TESTIMONIAL - THE INTERNATIONAL HEREDITARY CANCER CENTER TwinGuard ULT Freezers IHCC research has also led to significant discoveries in the early detection of some of the most common forms of cancer, such as breast cancer (BRCA1 and BRCA2) and colon cancer (HNPCC), which have been published internationally. Equipped for large scale specialist research As a key global resource in the fight against cancer, guaranteed sample security and optimal efficiency are the top priorities in ensuring viability of the vast biobank. The large number of samples involved the IHCC’s research must...

Emerging biotechnology landscape Panasonic products have quickly established a strong and positive reputation within the growing biotechnology industry in Poland. “Poland’s biotechnology industry is thriving with new opportunities as an EU Member State,” said Jacek Kaczorek, founder and owner of Sanlab, who supply Panasonic Biomedical products in Poland. “As a result, we see significant expansion and investmentsin research facilities, universities and institutes, such as the IHCC, and also in commercial companies involved in the pharmaceutical and agricultural industries.” Sanlab has also...