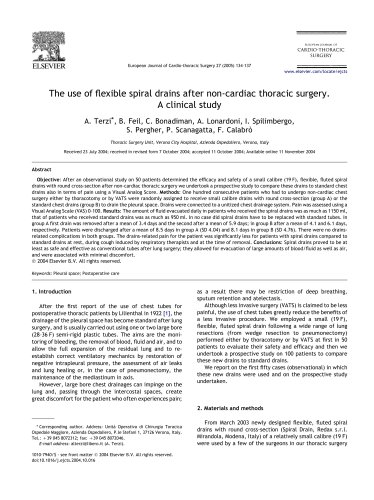 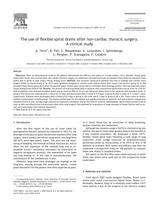 European Journal of Cardio-thoracic Surgery 27 (2005) 134–137 www.elsevier.com/locate/ejcts The use of exible spiral drains after non-cardiac thoracic surgery. A clinical study A. Terzi*, B. Feil, C. Bonadiman, A. Lonardoni, I. Spilimbergo, S. Pergher, P. Scanagatta, F. Calabro ` Thoracic Surgery Unit, Verona City Hospital, Azienda Ospedaliero, Verona, Italy Received 23 July 2004; received in revised form 7 October 2004; accepted 11 October 2004; Available online 11 November 2004 Abstract Objective: After an observational study on 50 patients determined the efcacy and safety of a small calibre (19 F), exible, uted spiral drains with round cross-section after non-cardiac thoracic surgery we undertook a prospective study to compare these drains to standard chest drains also in terms of pain using a Visual Analog Score. Methods: One hundred consecutive patients who had to undergo non-cardiac chest surgery either by thoracotomy or by VATS were randomly assigned to receive small calibre drains with round cross-section (group A) or the standard chest drains (group B) to drain the pleural space. Drains were connected to a unitized chest drainage system. Pain was assessed using a Visual Analog Scale (VAS) 0–100. Results: The amount of uid evacuated daily in patients who received the spiral drains was as much as 1150 ml, that of patients who received standard drains was as much as 950 ml. In no case did spiral drains have to be replaced with standard tubes. In group A rst drain was removed after a mean of 3.4 days and the second after a mean of 5.9 days; in group B after a mean of 4.1 and 6.1 days, respectively. Patients were discharged after a mean of 8.5 days in group A (SD 4.04) and 8.1 days in group B (SD 4.76). There were no drainsrelated complications in both groups. The drains-related pain for the patient was signicantly less for patients with spiral drains compared to standard drains at rest, during cough induced by respiratory therapists and at the time of removal. Conclusions: Spiral drains proved to be at least as safe and effective as conventional tubes after lung surgery; they allowed for evacuation of large amounts of blood/uid as well as air, and were associated with minimal discomfort. q 2004 Elsevier B.V. All rights reserved. Keywords: Pleural space; Postoperative care 1. Introduction After the rst report of the use of chest tubes for postoperative thoracic patients by Lilienthal in 1922 [1], the drainage of the pleural space has become standard after lung surgery, and is usually carried out using one or two large bore (28–36 F) semi-rigid plastic tubes. The aims are the monitoring of bleeding, the removal of blood, uid and air, and to allow the full expansion of the residual lung and to reestablish correct ventilatory mechanics by restoration of negative intrapleural pressure, the assessment of air leaks and lung healing or, in the case of pneumonectomy, the maintenance of the mediastinum in axis. However, large bore chest drainages can impinge on the lung and, passing through the intercostal spaces, create great discomfort for the patient who often experiences pain; as a result there may be restriction of deep breathing, sputum retention and atelectasis. Although less invasive surgery (VATS) is claimed to be less painful, the use of chest tubes greatly reduce the benets of a less invasive procedure. We employed a small (19 F), exible, uted spiral drain following a wide range of lung resections (from wedge resection to pneumonectomy) performed either by thoracotomy or by VATS at rst in 50 patients to evaluate their safety and efcacy and then we undertook a prospective study on 100 patients to compare these new drains to standard drains. We report on the rst fty cases (observational) in which these new drains were used and on the prospective study undertaken. 2. Materials and methods * Corresponding author. Address: Unita Operativa di Chirurgia Toracica ` Ospedale Maggiore, Azienda Ospedaliero, P.le Stefani 1, 37126 Verona, Italy. Tel.: C39 045 8072312; fax: C39 045 8072046. E-mail address: alterzi@libero.it (A. Terzi). 1010-7940/$ - see front matter q 2004 Elsevier B.V. All rights reserved. doi:10.1016/j.ejcts.2004.10.016 From March 2003 newly designed exible, uted spiral drains with round cross-section (Spiral Drain, Redax s.r.l. Mirandola, Modena, Italy) of a relatively small calibre (19 F) were used by a few of the surgeons in our thoracic surgery 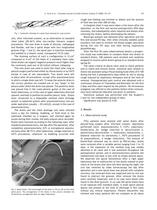 A. Terzi et al. / European Journal of Cardio-thoracic Surgery 27 (2005) 134–137 Fig. 1. Schematic drawing of a spiral drain showing its cross-section. unit, after informed consent, as an alternative to standard chest tubes (28–36 F) after non-cardiac thoracic surgery procedures. The new drain is made of silicone, radiopaque and exible, and has a spiral shape with four longitudinal grooves (Figs. 1 and 2), the spiral part is injection-moulded and welded to a silastic round, transparent 19 Ch tube. The draining surface of such a conguration is 12 cm2 compared to 4 cm2 of the holes of a... 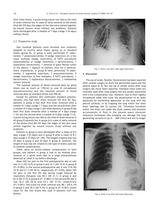 136 A. Terzi et al. / European Journal of Cardio-thoracic Surgery 27 (2005) 134–137 their chest drains. A purse string suture was tied at the time of drain removal but in cases of early removal of the drains (2nd–4th PO day) the edges of the skin were joined together by wound closure strips without any problems. Patients were discharged after a median of 7 days (range 3–24 days) without drains. 3.2. Prospective study One hundred patients were enrolled and randomly assigned to receive spiral drains (group A) or standard drains (group B). In group A were performed 21 lobectomies, 7... 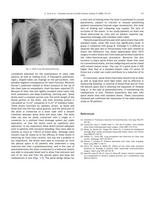 A. Terzi et al. / European Journal of Cardio-thoracic Surgery 27 (2005) 134–137 Fig. 5. Chest X-ray left pneumonectomy. considered indicated for the maintenance of chest tube patency as well as milking [5,6]. If improperly positioned, rigid L shaped tubes can impinge on the pericardium, with possible negative consequences for heart function. Recently Horner’s syndrome related to direct pressure of the tip of the chest tube on sympathetic chain has been reported [7]. Because of their size and rigidity standard chest tubes may limit ambulation and deep breathing, eliciting pain. Spiral drains...

All Redax catalogs and technical brochures