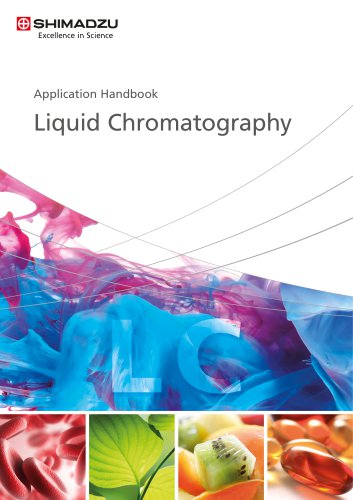 HPLC, UHPLC as well as SFC systems are able to quantitatively analyze substances in mixtures containing multiple ingredients by separating and detecting target substances. They are used to separate, quantify, qualify or purify single components from a sample containing various analytes in different matrices. Shimadzu offers a wide variety of application-specific systems, such as automated sample pretreatment systems for amino acid analysis or on-line sample trapping for the quantification of residual pesticides in food or soil. Find more information on: www.shimadzu.eu/liquid-chromatography

The analysis of whole blood, plasma, serum and urine is a most insightful method in clinical research. Since the sensitivity of analytical instrumentation has improved steadily in recent years, research results and reliability have increased as well. In clinical applications, analytical instruments unfold a multitude of benefits: • hey support the quality of life by optimizing the treatment T plan. Therapeutic Drug Monitoring (TDM) can assure the plasma concentration of a medication which is affected by age or health and also depends on gender, genetic constitution and drug regimen....

Data Sheet High-speed, Sensitive Analysis of Serotonin No. 21 Serotonin (5-hydroxytryptamine) is a biologically active substance that plays an important role in the body, functioning in the blood to constrict the vascular smooth muscle, and to promote platelet aggregation. This article introduces an example of ultrafast analysis of serotonin in the blood utilizing the Nexera UHPLC system and the RF-20Axs high-sensitivity fluorescence detector. Analysis of Serotonin in the Blood The blood sample was subjected to deproteinization via an aqueous trichloroacetic acid solution. A Shim-pack...

Application News High Performance Liquid Chromatography High Sensitivity Profiling of Glycans in Antibody Drugs Using RF-20AXS Glycans, or sugar chains, in antibody drugs play roles in the antigenicity, pharmacokinetics, and stability of higher-order structure, which could adversely affect their safety and effectiveness. Further, there is also concern about the non-uniformity of these glycans due to instability of antibody drug culture conditions, which h a s h e i g h t e n e d the nec essity to manage th ei r production process. However, while there is currently no glycan test method...

Application No. L452A News Table 2 Analytical Conditions n Analysis of Glycans in Antibody Drugs According to the pretreatment procedure of Fig. 3, the glycans were extracted from 2 types of antibody drugs, a n d f o l l o w i n g p u r i f i c a t i o n , w e re s u b j e c t e d t o fluorescent derivatization by PA (pyridylamination). Fig. 4 shows the chromatograms of PA-glycans from antibody drugs, and Table 2 shows the analytical conditions used. Comparing the peaks in the vicinity of 50 minutes for the drugs A and B, respectively, the quantity of glycans associated with that peak in...

n Analysis of Angiotensin I Hydrolysate Angiotensin is a polypeptide that exhibits vasoconstriction activity to increase blood pressure. There are four types of angiotensin, types Ⅰ- Ⅳ, that differ in the numbers and types of amino acids in their structures. The structure of angiotensin Ⅰ consists of a total of ten amino acid residues, including aspartic acid, arginine, valine, tyrosine, isoleucine, proline, phenylalanine, leucine, and two molecules of histidine. In response to the action of angiotensin-converting enzyme (ACE), angiotensin Ⅰ is converted to angiotensin Ⅱ, which exhibits...