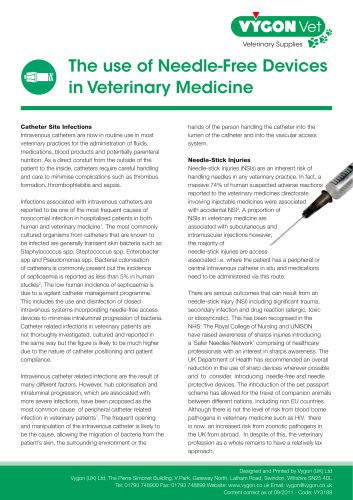 Veterinary Supplies The use of Needle-Free Devices in Veterinary Medicine Catheter Site Infections Intravenous catheters are now in routine use in most veterinary practices for the administration of fluids, medications, blood products and potentially parenteral nutrition. As a direct conduit from the outside of the patient to the inside, catheters require careful handling and care to minimise complications such as thrombus formation, thrombophlebitis and sepsis. Infections associated with intravenous catheters are reported to be one of the most frequent causes of nosocomial infection in hospitalised patients in both human and veterinary medicine1. The most commonly cultured organisms from catheters that are known to be infected are generally transient skin bacteria such as Staphylococcus spp, Steptococcus spp, Enterobacter spp and Pseudomonas spp. Bacterial colonisation of catheters is commonly present but the incidence of septicaemia is reported as less than 5% in human studies2. The low human incidence of septicaemia is due to a vigilant catheter management programme. This includes the use and disinfection of closed intravenous systems incorporating needle-free access devices to minimise intraluminal progression of bacteria. Catheter related infections in veterinary patients are not thoroughly investigated, cultured and reported in the same way but the figure is likely to be much higher due to the nature of catheter positioning and patient compliance. Intravenous catheter related infections are the result of many different factors. However, hub colonisation and intraluminal progression, which are associated with more severe infections, have been proposed as the most common cause of peripheral catheter related infection in veterinary patients1. The frequent opening and manipulation of the intravenous catheter is likely to be the cause, allowing the migration of bacteria from the patient’s skin, the surrounding environment or the hands of the person handling the catheter into the lumen of the catheter and into the vascular access system. Needle-Stick Injuries Needle-stick injuries (NSIs) are an inherent risk of handling needles in any veterinary practice. In fact, a massive 74% of human suspected adverse reactions reported to the veterinary medicines directorate involving injectable medicines were associated with accidental NSI3. A proportion of NSIs in veterinary medicine are associated with subcutaneous and intramuscular injections however, the majority of needle-stick injuries are access associated i.e. where the patient has a peripheral or central intravenous catheter in situ and medications need to be administered via this route. There are serious outcomes that can result from an needle-stick injury (NSI) including significant trauma, secondary infection and drug reaction (allergic, toxic or idiosyncratic). This has been recognised in the NHS: The Royal College of Nursing and UNISON have raised awareness of sharps injuries introducing a 'Safer Needles Network’ comprising of healthcare professionals with an interest in sharps awareness. The UK Department of Health has recommended an overall reduction in the use of sharp devices wherever possible and to consider introducing needle-free and needle protective devices. The introduction of the pet passport scheme has allowed for the travel of companion animals between different nations, including non EU countries. Although there is not the level of risk from blood borne pathogens in veterinary medicine such as HIV, there is now an increased risk from zoonotic pathogens in the UK from abroad. In despite of this, the veterinary profession as a whole remains to have a relatively lax approach. Designed and Printed by Vygon (UK) Ltd Vygon (UK) Ltd, The Pierre Simonet Building, V Park, Gateway North, Latham Road, Swindon, Wiltshire SN25 4DL Tel: 01793 748900 Fax: 01793 748899 Website: www.vygon.co.uk Email: vygon@vygon.co.uk Content correct as of 09/2011 - Code: VY3189

What is the Solution? To address the challenges associated with vascular access, products have been developed that maintain a closed system of intravenous access and also eliminate the risk of NSI. These needle-free devices, although developed initially for human healthcare workers, are even more beneficial to veterinary practitioners because the level of patient co operation is much lower. If you are considering introducing a new product into your practice, the following should be taken into account: • Once a cannula is in place, vascular access will often be required on numerous...