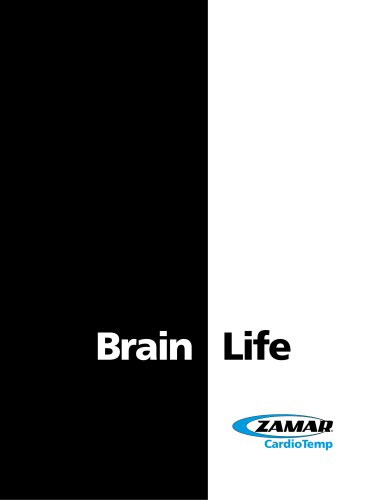 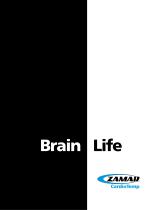 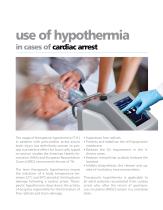 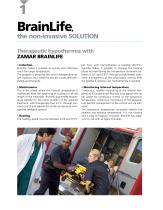 Therapeutic hypothermia with ZAMAR BRAINLIFE • Induction Brainlife makes it possible to quickly and effectively reach the target temperature. The program is preset by the doctor (temperature target, duration, etc.) while the process is executed completely automatically. per hour until normothermia is reached (36.5°C). Brainlife makes it possible to manage the heating phase by maintaining the temperature increment between 0.20° and 0.50°, through computerised, automatic management of the information coming from the feedback systems until normothermia is reached. • Maintenance This is the... 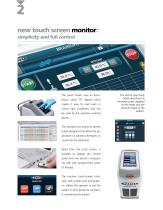 2 new touch screen monitor: simplicity and full control The touch screen uses an amorphous silicon TFT display which makes it easy to read even in critical light conditions and can be used by the operator wearing gloves. The operator has access to several preset programs that allow the application of standard therapies or customize the treatment. Apart from the touch screen, is possible to update the control panel from the doctor’s computer via USB with programmed cycles of therapy. The intuitive touch-screen interface, with simple icons and graphics, allows the operator to use the system... 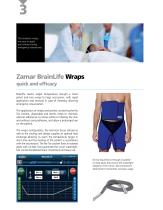 3 The anatomic wraps are easy to apply and remove during emergency manoeuvres. Zamar BrainLife Wraps quick and efficacy Brainlife reachs target temperature though a chest jacket and two wraps for legs and groins, with rapid application and removal in case of necessity allowing emergency resuscitation The application of wraps and jackets containing the No Tox coolant, disposable and sterile, helps to maintain optimal adherence to tissue without irritating the skin and without using adhesive, and allow a prolonged use on the patient. The wraps configuration, the technical tissue utilized as... 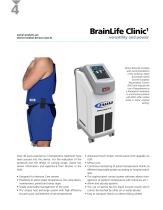 4 Zamar products are electro-medical devices Class IIa Zamar BrainLife complies with recommendations of the American Heart Association (AHA) and the European Resuscitation Council (ERC) that indicate the use of hypothermia as a therapeutic treatment in unconscious patients with ROSC after cardiac arrest in “extra” hospital setting. Over 40 years experience in temperature treatment have been poured into this device. For the realization of the protocols and the design of cooling wraps, Zamar has drawn information and experience from doctors in the field. • Designed for Intensive Care centres... 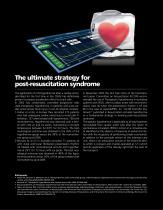 The ultimate strategy for post-resuscitation syndrome The application of mild hypothermia after a cardiac arrest, described for the first time in the 1950s has definitively proven to possess a protective effect for brain cells. In 2002 two randomised, controlled prospective trials used therapeutic hypothermia in patients with post-cardiac arrest anoxic brain injury in out-of-hospital contexts: 1.Holzer et al (6), in Europe they recruited 275 patients who had undergone cardiac arrest due to ventricular fibrillation; 137 were treated with hypothermia, 138 with normothermia; Hypothermia was... 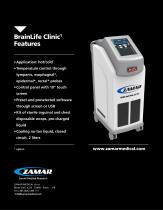