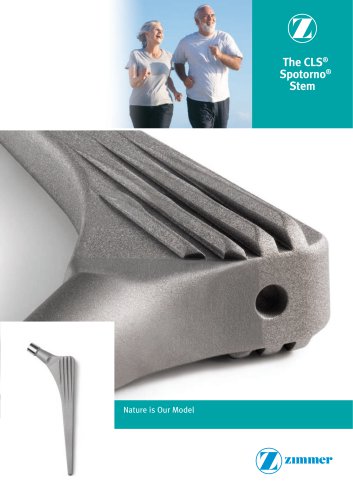 The concept underlying the CLS Spotorno Stem is based on the idea of predominantly proximal anchorage and a long-lasting mechanical stability through osseointegration. This cementless stem, with its characteristic three-dimensional wedge shape and sharpened ribs in the proximal region, was launched in 1984. Since then, the innovative CLS Spotorno Stem has not undergone any major changes, but has enjoyed certain technical improvements brought about by experience. Over 20 years of extensively documented clinical results and over 500,000 implants (as of 2007) demonstrate the success and...

1980: The Prototype The initial idea was to achieve proximal anchorage by means of a stem with a spinous macrostructure in the proximal region. This earned the implant the nickname of “shaved porcupine prosthesis”. This stem served as a model for the CLS Spotorno Stem. 1983: Creation of the CLS Stem: The Macrostructure With the introduction of the Protasul®-64 titanium alloy, the stem was given a trapezoidal shape, which implements the theoretical prerequisites for press-fit in practice. The proximal design, made up of ribs running longitudinally, has been designed to optimize the...

1997–2004: Range of Indications Expanded 2004: Slim Neck and Short Taper for a Better Range of Motion Modified Neck Geometry Improves ROM Alongside the traditional CLS Spotorno In order to increase the range of motion Stem design with a CCD angle of 145 °, and reduce impingement, the length of the a version of the stem with an angle of 135 ° taper has been shortened and the neck diameter has been reduced. A computerized enlarge the range of indications and to analysis showed an average increase in better restore the human anatomy, the CLS range of motion of at least 5 degrees for 125 ° was...

Design Concept Primary Stability for Stable Secondary Anchorage Three-Dimensionally Tapered Structure Ribs in the Proximal Region Anchoring of the stem in the proximal Tapered Design of the Distal Part of the Stem with Rough-blasted Surface The CLS Spotorno Stem achieves primary region favors the transfer of forces in this In order to avoid stress peaks, the edges stability through the press-fit principle. area. In the proximal region, the ribs of the distal part of the stem are rounded. With its three-dimensional taper, the are designed with sharp edges in order The narrowing of the distal...

The Material Osteophilic Titanium Alloy to Promote Osseointegration The rough-blasted Protasul-100 titanium alloy of the CLS Spotorno Prosthesis is which are subjected to a microtrauma largely osteophilic. The material and the upon surgery, is particularly rapid and nature of the surface play an important takes part in the osseointegration process. role in bone regeneration in the area directly surrounding the prosthesis. Generally speaking, the new bone formations accumulate preferentially on prominent parts such as the ribs or the sharp edges of the prosthesis. The bone parts that had...

The CLS Spotorno Stem Offset Philosophy Optimal Reconstruction of the Anatomy The surgeon’s objective in hip reconstruc- In an anthropometric study conducted tion is to rebuild anatomy by restoring the on 353 standardized X rays in the Santa For all dysplastic femurs presenting an optimal muscular length without modifying Corona hospital in Pietra Ligure, the extreme valgus morphology, the use offset and the CCD angle were measured. of the Wagner Cone Prosthesis™ Stem is The offset distribution in the examined population follows a bell-shaped curve, as documented in the work of Noble2,...

Since the CCD angle and the offset are not constant values, and these values vary greatly from one individual to another, the CLS Spotorno Stem now offers a wide range of offset options, to allow for an adequate restoration of biomechanical parameters like the center of rotation, the CCD angle, the leg length, and the soft-tissue balancing. Dimensions in mm (for Head M) Size Length CLS 145° CLS 135° CLS 125° Difference “L” offset offset offset “a1” Note The same instruments and the same surgical technique are used for all CLS Spotorno Stems.

Long-term clinical studies, along with the worldwide acceptance and use of the CLS Spotorno Stem, are evidence of the quality of this implant. Many years of consistency in the underlying concept of the CLS Spotorno system have led to conclusive information based on longterm studies on the behavior of the prosthesis, its tolerability and its ability to osseointegrate. Clinical Results Year Author Journal Number Follow-up Survival rate of cases (years) (endpoint aseptic loosening) 477-616 1996 Bulow et al. OP-Journal no. 2/12 (1996) first 207 7-10 2000 Schramm et al. Arch. Orthop. Trauma 98...

The Rasp and Trial Necks Targeted Compression and Cutting and Exact Trial Reposition The modular CLS Spotorno Rasp is a high- and compressed in the remaining areas precision instrument used for preparing an where the primary stability needs to be in- trial necks facilitates intraoperative hand- ideal seat in which to anchor the stem. It creased. The CLS Spotorno Rasp offers the ling as well as an accurate repositioning of was designed taking into account both the optimum compromise between minimum antecurvature and the varus shape of the removal of bone substance and maximum femur. Bone...